There are a number of requirements and restrictions on the type of expenditure that can be brought in to account for the purposes of R&D relief.

Firstly, there is a cap of €7.5m per project. Where expenditure exceeds the cap for a project then RDEC may be claimed on the excess.

The first is that it must be revenue – I assume we are familiar with the difference between revenue and capital.

For capital items, there is a R&D Capital Allowance scheme which allows you to write down all of your R&D spending on fixed assets. Unlike the Annual Investment Allowance, RDA is not capped. But that’s not the subject of today.

Generally, most R&D expenditure will relate to the trade – it will either be used in the trade or might be licensed to others. Both will qualify. It is not necessary for the company use it to create its goods or provide its services.

Further, one could have a group company which carries out the R&D for other group companies. 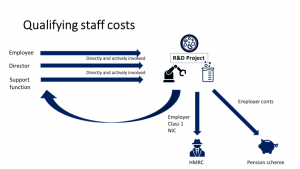 Staff costs are allowable and will often be the main source of qualifying expenditure in a claim.

Staff costs are not just salaries, but will also include Employer NIC and even contributions to a pension scheme.

Note, qualifying staff costs do not include benefits in kind.

This can be a problem for start-up / high growth tech businesses which might seek to reward staff with share options. These are not qualifying costs.

Further, the payment of dividends do not count as qualifying staff costs – so this should be considered if you act for the Company generally. In other words, consider the interaction between their remuneration structure and R&D?

These are items that are eaten up in the R&D project.

Admin supplies, such as printer toner and paper, are not usually considered as consumables/ 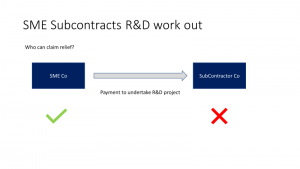 The SME can still claim relief.

The firm undertaking the work cannot.

However, the SME co has a slightly different dance to go through.

First question is are they connected?

If so, then the SME can claim the lower of:

If they are not connected, then they can JOINTLY elect for the treatment above.

If not connected and can’t elect then the SME can claim 65% of the payment as an additional deduction.

We have to be careful where a project has obtained a grant or a subsidy. Note, it is the project that is important.

R&D relief is state aid – and one cannot compound state aid. Most, but by no means all,  EU / Government funding is state aid.

If one receives Notified State Aid – such as the Smart Grant – in connection with a project then none of the expenditure can qualify for relief. RDEC can be claimed instead.

In the case of non-notified state aid – eg the Horizon 2020 programme – this reduces the amount that can qualify for the SME Relief.

Again, the balance may qualify for RDEC.

In respect of furlough claims, then these are unlikely to be in respect of a project so these should not be a problem.

One needs to be more careful with CBILS and Bounce Back Loans. Both of these are likely to be notified state aid. So, if funds raised through these channels are used on the project then this could be deleterious. Tread carefully.

In any event, it should still be possible to claim RDEC.

If you have any queries about R&D Qualifying expenditure or R&D in general then please do get in touch.