As I write, we’re less than seven weeks away from Hallowe’en, the seemingly most scary night on the calendar.

Fancy dress shops are already filled with pumpkins, witches’ hats and masks of some of the movie world’s most notorious characters. 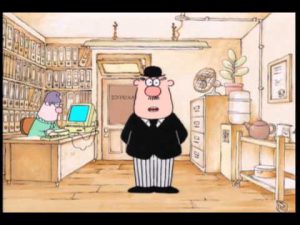 I wouldn’t be the only one greatly startled to find Hector, the retired cartoon star of the former Inland Revenue’s public information films, popping up among their ranks but I wouldn’t entirely rule it out.

For HMRC has only recently been accused of engaging in the kind of spooky behaviour which might be scoffed at by the likes of Freddy Krueger, Count Dracula and Hannibal Lecter but is bone-chilling all the same.

A recent ruling by a First Tier Tribunal has claimed that the Revenue used figures “plucked from the air” in an attempt to frighten a taxpayer in a dispute over a tax bill of more than a quarter of a million pounds.

It made a determination that Sebastian Cussens not only owed £272,840 in Income Tax on sales of second-hand cars but had failed to declare profits over the course of more than a decade, something for which HMRC levied additional penalties totalling £70,102.

Mr Cussens, it emerged at his hearing, had been receiving “enhanced employment and support allowance”, a benefit paid to people unable to work because of ill health or disability.

Based on that fact and observations made at the hearing, the Tribunal judgement believed he “lacked the skill, ability and perhaps the understanding to deal with this appeal properly”.

Even allowing for the fact that he had failed to co-operate fully with HMRC, the judgement reserved the kind of savaging last seen in ‘An American Werewolf In London’ for the Revenue over how it calculated the sums due.

Just like a lycanthrope, the judgement described HMRC’s assumptions as “wild, extravagant and unreasonable” and said its assessments as having been made “almost ‘in terrorem'”.

The ruling continued: “It seems that nobody at HMRC is actually in reality checking these cases and asking ‘is this a realistic amount?'”.

Now, it’s easy to regard the Cussens case as an exception. Just as one scream does not a horror movie make, an occasional kicking doesn’t mean that all the Revenue’s operations are as flawed as this latest judgement might indicate.

However, just take a look at HMRC’s own figures and a slightly more troubling picture emerges.

In its annual report issued in July, the Revenue details how the number of taxpayers winning judgements against it has more than doubled during the previous 12 months.

If we consider the data from cases making it to the First Tier Tribunal and include those matters referred to as a ‘partial win’ for HMRC, it acknowledges that its success rate at that stage has fallen to 75 per cent – down three per cent on the year before.

It’s naturally only fair to use that ‘partial win’ description in totting up how taxpayers get on  (cases in which “substantive elements of HMRC’s case succeeded”) as they might argue equally as subjectively that they’d proven their point.

Anybody doing that could reasonably calculate that the number of Tribunal judgements going in favour of taxpayers – in whole or in part – has increased by 10 per cent (to 37 per cent) in the space of a single year.

The impression that HMRC isn’t having things its own way can be further reinforced by reports of a 36 per cent rise in the number of judicial reviews of its adjudications.

HMRC – the cloak and dagger approach…

Is it perhaps that taxpayers have generally had enough of the kind of “aggressive” behaviour dissected in a report published by the House of Lords’ Economic Affairs Committee last December or is it simply that the stakes and the language on both sides have become especially higher-pitched?

While HMRC is, it must be said, being placed under greater pressure on a variety of fronts, including the extra workload needed to prepare for a possible Brexit, taxpayers find themselves subject to a vigorous pursuit of so-called ‘disguised remuneration‘.

The loan charge which came into effect in April of this year and will potentially impact on 50,000 individuals has been cited as a factor in a series of suicides and prompted MPs demands for HMRC to do more to help those considered “vulnerable”.

Whatever the true reason for the growing and obvious conflict, it illustrates how the Revenue has been caught playing fast and loose with its sums and that is the kind of situation which – unsurprisingly – is enough to give a lot of people nightmares.

If you have any queries about this article, or if you are being ‘terrorised’ by HMRC, then please do not hesitate to get in touch. You can also read more about HMRC below.