It’s often said that individuals who play video games have too much time on their hands.

Given the £2 million prize claimed last month by the winner of a competition for fans of one favourite, Fortnite, one could argue that the effort is worth it.

No matter how often they play, most individuals will never come close to landing such a payout. The truth is that those creating games, especially those with global appeal, are the real winners. 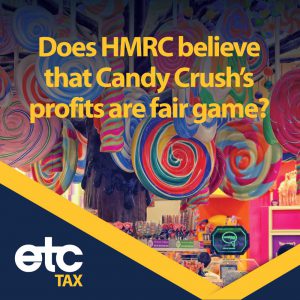 In June, Alex Dale, a Senior Vice President for King, the company which came up with Candy Crush, appeared before the Commons’ Culture, Media and Sport Select Committee.

He was quoted as telling MPS that 432,000 of the 270 million people across the world who have downloaded the game – which involves matching sweets of the same colour – play it for at least six hours a day.

Unsurprisingly, income of that kind hasn’t escaped the world’s tax jurisdictions, including HMRC.

Although Candy Crush is free to download, the Revenue’s attention has been piqued by the fact that the game’s UK-based players agree a myriad of ‘In-App Purchases’ involved in progressing through the various levels of the game are made from King.com, a business whose head office is in Malta.

Malta, although it has a headline rate of 35%, generally has an effective Corporation Tax rate of 5 per cent compared to the main UK rate of 19 per cent.

According to news reports last month, HMRC has already demanded £2.4 million in unpaid tax from Activision Blizzard for the 2013 tax year, maintaining that such a process amounts to a ‘transfer pricing arrangement’.

The same source has noted that the Revenue is chasing “an estimated £6m for the years 2014-17”.

HMRC Cracking Down on DPT

The article also noted that HMRC’s counterparts in Sweden were involved in discussions over similar matters.

Greater scrutiny of ‘transfer pricing’ in recent years precipitated the introduction of a Diverted Profits Tax (DPT) in 2015 by the then Chancellor of the Exchequer, George Osborne, who was concerned that multi-national companies were unfairly routing profits generated in the UK to territories with lower taxes and thereby reducing the amounts they were required to pay the Revenue.

The first major brand to fall foul of the Government’s crackdown was Diageo, the maker of such instantly familiar drinks as Johnnie Walker whisky and Guinness. In May 2017, it emerged that HMRC had demanded a settlement of £107 million following an investigation into how it was allegedly moving profits between its various companies across the globe.

However, as myself and The Times’ Financial Editor Patrick Hosking later discovered, Diageo agreed to cough up a far larger sum – £190 million – in Corporation Tax in order, I believe, to avoid the stigma of being labelled a tax avoider.

Perhaps emboldened by that outcome, HMRC went one step further in January of this year, launching the Profit Diversion Compliance Facility.

In describing the Facility’s purpose, the Revenue didn’t mince its words, setting out how it would allow multi-nationals the chance to come up to scratch by “reconsidering” their ‘transfer pricing’ policies, “making a full and accurate disclosure of the facts” or ” paying what is owed”.

The development was, says The Times, accompanied by a flurry of letters from HMRC to large businesses which it thought “may be diverting profits away from the UK” offering them the chance to come clean.

If Activision Blizzard does end up paying up, it will mark another blow for the games industry. As I remarked on this ‘blog, only last week, another of the sector’s major names, Rockstar North, found itself embroiled in a row over its use of Video Games Tax Relief (VGTR).

No matter the digital world that their creations inhabit, games designers are finding that being at the sharp end of HMRC’s attentions is anything but virtual.

If you have any queries about this article, or international tax planning, then please do get in touch. Read more about HMRC below…