What’s BEPS got to do with it?

The OECD report on Base Erosion and Profit Shifting (“BEPS”) suggested changes to patent boxes.

Primarily, the report required a link between the place where the R&D activity is carried out and the jurisdiction providing the relief.

In other words, broadly, if the UK is offering a Patent Box relief then the research and development activity underlying it should take place in the UK as well.

The BEPS report resulted in new legislation in FA2016 with changes taking effect from 1 July 2016.

A tale of two regimes 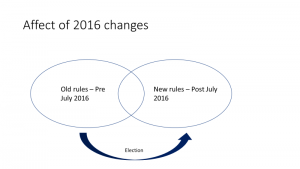 The problem is the changes created two main regimes:

Further, there is a bit of a middle ground as:

We only have to put up with this until July 2021 when the old rules and the transitional rules are obsolete and all Companies are within the post 2016 rules on a mandatory basis. 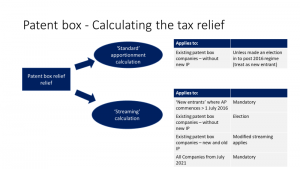 So, a bit more on the different regimes.

The significance of determining which rules the Company is subject to is important in deciding which that the method of calculation we use:

Which regime – questions to ask ourselves

As such, we need to ponder a handful of questions as to which set of rules we apply:

There is a distinction between old entrants and new entrants.

If you have any queries about this article, or patent box in general, then please get in touch.