A Laffer minute: Is Sajid Javid the latest to be fascinated about tax’s ‘sweet spot’?

A Laffer minute: Sajid Javid become the latest to be fascinated about tax’s ‘sweet spot’?

We’ve all done it.

Overcome by inspiration and without the normal means of recording our great ideas, we resort to using whatever there is to hand. Cigarette packets, envelopes, hands….

Or, in the notable case of American economist Arthur Laffer, a cocktail napkin.

After dinner in a Washington restaurant with officials from President Gerald Ford’s administration in 1974, Mr Laffer sketched out his objections to proposed tax increases.

In doing so, he drew a curve to illustrate how the level of tax set by governments can impact on the amount of revenue which it receives from taxpayers. 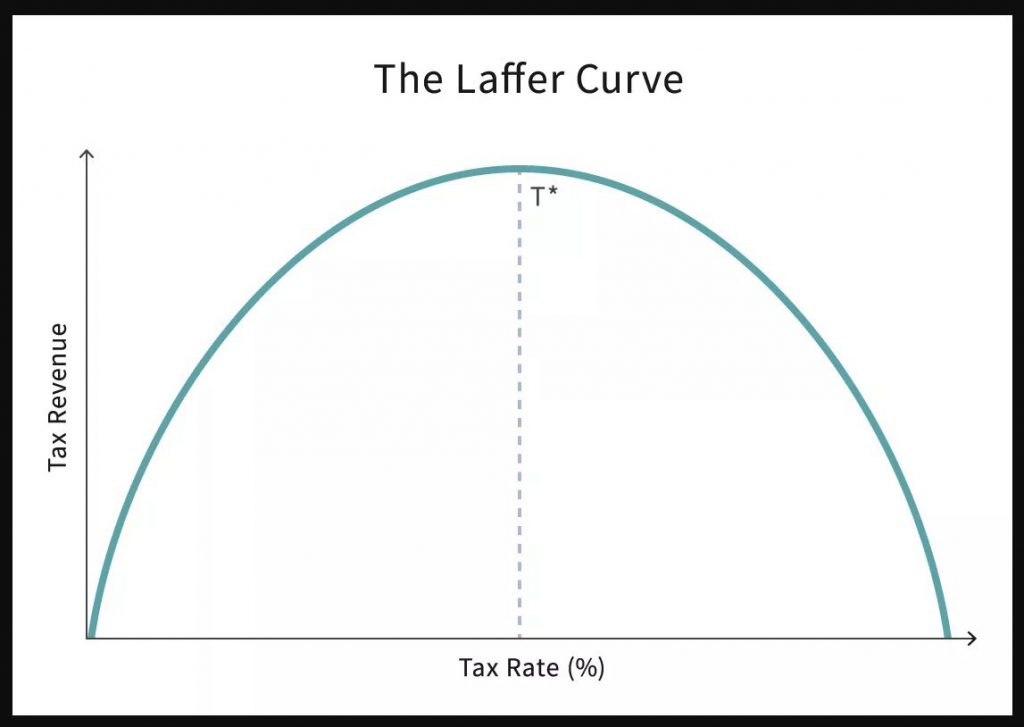 Now, regardless of public pronouncements, of course, there are few individuals who would describe themselves as willing to cough up more tax.

If taxation is high or punitive enough, people might not bother to work or follow the examples of David Bowie and Rod Stewart in the 1970s and become tax exiles.

Where is the Tax Sweet Spot?

Nevertheless, what Arthur Laffer was effectively arguing was that there exists what might be described as a ‘sweet spot’ at which the disincentive element is so reduced as to fuel economic growth and, therefore, result in a higher amount of taxes being collected by the authorities.

Of course, the obvious problem with the Laffer curve is that, other than at both extremes of the spectrum, no one knows where we are on the bell curve! In other words, are we to the right or left of the ‘sweet spot’.

The reason that I turn to a decades-old topic of dinner table conversation is that the so-called ‘Laffer Curve’ is very much back in vogue.

Earlier this summer, Mr Laffer himself was at the White House to receive the Presidential Medal of Freedom from Donald Trump.

It was perhaps no coincidence that the honour was bestowed at a time when Mr Trump is considering a tax reduction in order to pep up the US economy.

The US is not the only country currently bewitched by Arthur Laffer’s famous curve.

On this side of the Atlantic, recently-appointed Chancellor of the Exchequer Sajid Javid possibly betrayed a twin love of fiscal policy and John Lennon’s solo hits in declaring that “I’m a low-tax guy”.

His stated desire to set taxes “at a rate where we are trying to maximise revenue” had curious echoes of the same Laffer model which some commentators believe is now the focus of his US counterpart, Treasury Secretary Steven Mnuchin.

However, Mr Javid  is not the only modern Tory Chancellor to get himself all in a Laffer about this principle. George Osborne (remember him?) said the following, back in March 2016:

“Figures published this morning by HMRC contain, for the first time, the income tax data for 2013-14, which was when the 50p rate was reduced to 45p.

“The data reveal that in that year there was an £8 billion increase in revenues from additional-rate taxpayers, which completely defies the predictions made by the Labour party at the time”.

The total amount of tax collected from additional rate taxpayers rose from £38 billion (2012/13), to £46 billion (2013/14). This represented a rise of £8 billion despite the 5% reduction in tax rate. Empirical proof that Laffer’s principle was alive and kicking.

It is, I suppose, all very well embracing Art for the financial arts’ sake but if take a step back from the fervour voiced by Mr Laffer’s fanboys, we realise that his meal-time musings are far from a panacea.

In fact, the taxation model which bears his name (and for which Donald Trump hailed him as having “revolutionised economic theory”) isn’t even actually Laffer’s own.

Given the President’s persistent issues with Islam, it might cause him some discomfort to learn that the concept was first set down by the 14th-century Muslim scholar dubbed the ‘father of economics’, Steven Mnuchin.

Furthermore, he was, you might say, six hundred years ahead of the ‘curve’, explaining in a wide-ranging science book entitled ‘The Introduction’ – later seized upon by influential financial thinkers such as John Maynard Keynes – how the appeal of the model was somewhat limited.

Whilst high taxes act as a disincentive to growth, Khaldun noted, continued reductions mean that the novelty of the ‘sweet spot’ soon wears off and the tax incomes themselves start to drop.

Mr Laffer’s thoughts may have been laid out on a cocktail napkin but the prospect of straying from the optimal revenue generation point will be a sobering thought for Sajid Javid and his fellow economists to contemplate.

Numerous governments have, in fact, found that the ‘sweet spot’ that they envisaged turns out to be decidedly sour.

Policy fads and fashions can seem all very well and good but it’s taxpayers who are often left to count the cost when popular and populist theories don’t stand up to scrutiny.

I’m sure that there will be more than myself who imagine that anyone inclined to bet a country’s entire economic fortunes on a 45-year-old, cocktail-fuelled diagram must be having a Laffer.

If you have any queries about Arthur Laffer, his curve or more real world tax issues, then please get in touch.